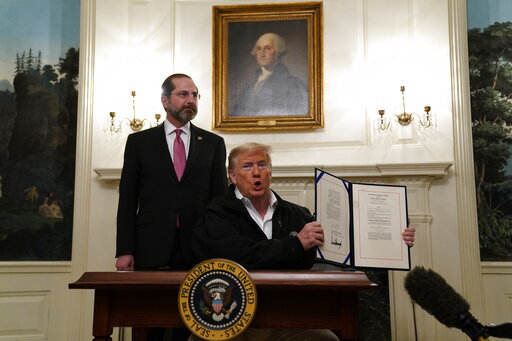 U.S. President Donald Trump on Friday signed an 8.3 billion U.S. dollar emergency funding plan to combat the novel coronavirus, which has killed 12 in the country and infected over 100,000 in the world, a new report from Johns Hopkins University revealed.

The funding measure includes over three billion U.S. dollars for research and development of vaccines, test kits and medical treatments, 2.2 billion to aid public health activities on prevention, preparedness and response, and 1.25 billion to help international efforts aimed at reining in the virus.

Speaking on the cancellation of his visit to the Centers for Disease Control and Prevention in Atlanta, Georgia, Trump told reporters he might go there in the end.

"We may go... they thought there was a problem with CDC with somebody who had the virus," he said, adding that the person in question has been tested and it came back negative.